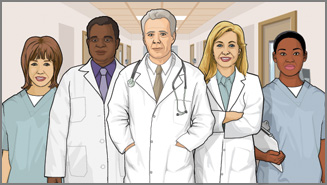 Change Selection
Back
To
Top
The information provided herein should not be used during any medical emergency or for the diagnosis or treatment of any medical condition. A licensed medical professional should be consulted for diagnosis and treatment of any and all medical conditions. Links to other sites are provided for information only -- they do not constitute endorsements of those other sites. © 1997- A.D.A.M., a business unit of Ebix, Inc. Any duplication or distribution of the information contained herein is strictly prohibited.
© 1997- All rights reserved.
LifeCycle Stories
The Health Benefits of Owning a Pet
By Sherry Baker is a writer from Atlanta, Georgia.

What has your pet done for you lately? Maybe your dog alerts you if a stranger steps foot on your porch better than any security system. Or perhaps your cat makes you smile as it chases a toy mouse down the hall or cuddles next to you while you take a nap. More than likely, your pets are companions who provide you with unconditional love and may well be considered members of your family.

However, what you may not realize is that interacting with animals may have additional benefits. A growing body of research suggests pets can benefit both physical and emotional health often in remarkable and, sometimes, even life-changing ways.

Heart attack help from Fido. A study funded by the National Institutes of Health (NIH) followed 421 adults who had suffered heart attacks. The researchers discovered that after a year, the study participants who had dogs were significantly more likely to still be alive than were those who didn't have a pooch regardless of the severity of the heart attack.

Improving heart disease risk. The Centers for Disease Control and Prevention (CDC) report that owning a pet is linked to improved, healthier levels of cholesterol and triglycerides which can lower the risk of cardiovascular disease.

Stress relief. When scientists studied 240 married couples, those with companion animals were found to have lower heart rates and blood pressure, whether the people were at rest or subjected to stressful tests, than those without pets. What's more, the pet owners also demonstrated milder responses and quicker recovery from stress when they were with their pets. 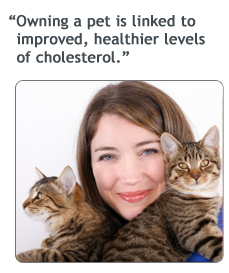 Get a dog and get moving! Several studies have shown that dog owners tend to get far more exercise than those without a dog. In fact, research funded by the NIH involving more than 2,000 adults found that dog owners who regularly walked their dogs were not only more physically active, but far less likely to be obese than those who didn't own or walk a dog. In his book The Healing Power of Pets (Hyperion), veterinarian Marty Becker points to research that found elderly dog owners spend a remarkable 1.4 hours a day outside with their pooches. "The kind of regular, moderate exercise you get by walking your dog fifteen minutes, twice daily in the morning and at night exactly fulfills the U.S. Surgeon General's prescription for moderate, regular physical exercise," Dr. Becker notes.

Cats vs. strokes and heart attacks. According to a study conducted by scientists at the University of Minnesota's Stroke Research Center involving 4,435 people between the ages of 30 to 75 who were followed over a 20-year period, those who had never owned a cat had a 40% greater risk of death due to heart attack and a 30% higher risk of death due to stroke or any sort of cardiovascular disease than previous or current cat owners. No one knows for sure, but some have speculated that listening to a cat purr or stroking a cat's soft fur may have an especially calming effect on cat owners.

Man's best friend leads to more human friends, too. Several studies have shown that walking with a dog helps people strike up conversations with other people and encourages social connections. That's important to health because research has shown that people who have more social relationships tend to live longer and are less likely to show mental and physical declines as they grow older. 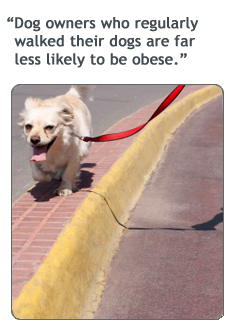 Helping children develop healthy emotions. When children are asked whom they want to talk to when they are emotionally upset, they often want their pets, according to Dr. James Griffin, a scientist at NIH's Eunice Kennedy Shriver National Institute of Child Health and Human Development. Dr. Griffin, an expert in child development and behavior, noted in a media statement that pets can help children develop empathy for others. He also pointed out that therapists and researchers have found children with autism sometimes have an easier time interacting with pets, and the animal interaction may help them eventually interact more easily with people.

Spotting health problems before doctors do. One of the most remarkable and strangest ways pets have helped their human friends is by somehow spotting serious health conditions early. While this connection is rare, it has been documented and, in some cases, saved lives. For instance, some dogs seem to sense when their owners who have epilepsy are about to suffer a seizure and are able to issue a warning even before their humans experience any symptoms. What's more, some dogs may have a nose for finding cancer.

Two British dermatologists first reported in the British medical journal The Lancet back in l989 how a dog refused to stop sniffing a mole on a woman's leg that had been diagnosed as benign. When the dog would not halt its fervent interest in the mole, "even trying to remove it," a trip to another skin specialist revealed the growth was a malignant melanoma. This deadly form of skin cancer would have killed the woman if the dog hadn't brought attention to it by behaving so strangely.

Since then, other doctors, including skin cancer specialist Dr. Armand Cognetta, have worked with dogs that seem to have an innate ability to sniff out cancer. A 2011 study found that specially-trained cancer detecting dogs could detect a tumor in 71% of patients. Researchers think the dogs are able to pick up scents of chemicals produced by cancerous tumors.

A new case involving breast cancer spotted by a pet dog was reported recently in the U.K. Sharon Rawlinson, 43, discovered she had a malignant tumor, thanks to her Cavalier King Charles spaniel, Penny. After Penny pawed and sniffed at a specific area of her owner's s left breast for weeks, Rawlinson finally made a doctor's appointment. A cancerous lump was found right where her dog had centered her attention. After successful treatment, Penny appeared to know the cancer in her owner was gone and stopped pawing the breast.