Pyloric stenosis is a narrowing of the pylorus, the opening from the stomach into the small intestine. This article describes the condition in infants.

The exact cause of the thickening is unknown. Genes may play a role, since children of parents who had pyloric stenosis are more likely to have this condition. Other risk factors include certain antibiotics, too much acid in the first part of the small intestine (duodenum), and certain diseases a baby is born with, such as diabetes.

Pyloric stenosis occurs most often in infants younger than 6 months. It is more common in boys than in girls.

Vomiting is the first symptom in most children:

Other symptoms appear several weeks after birth and may include:

The condition is usually diagnosed before the baby is 6 months old.

A physical exam may reveal:

Ultrasound of the abdomen may be the first imaging test. Other tests that may be done include:

Ultrasound of the abdomen

Abdominal ultrasound is a type of imaging test. It is used to look at organs in the abdomen, including the liver, gallbladder, spleen, pancreas, and...

Treatment for pyloric stenosis involves surgery to widen the pylorus. The surgery is called pyloromyotomy.

If putting the infant to sleep for surgery is not safe, a device called an endoscope with a tiny balloon at the end is used. The balloon is inflated to widen the pylorus.

An endoscope is a medical device with a light attached. It is used to look inside a body cavity or organ. The scope is inserted through a natural o...

In infants who cannot have surgery, tube feeding or medicine to relax the pylorus is tried.

Surgery usually relieves all symptoms. As soon as several hours after surgery, the infant can start small, frequent feedings.

If pyloric stenosis isn't treated, a baby won't get enough nutrition and fluid, and can become underweight and dehydrated.

Call your health care provider if your baby has symptoms of this condition. 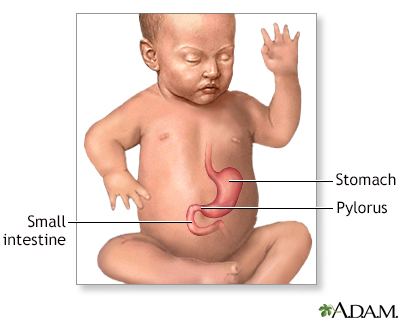 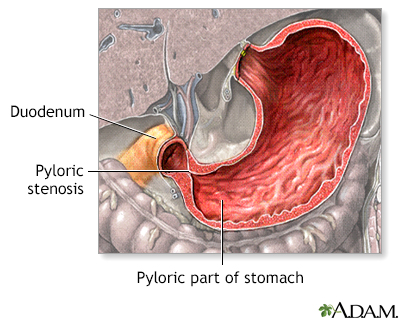 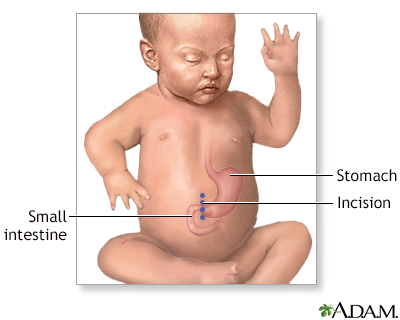 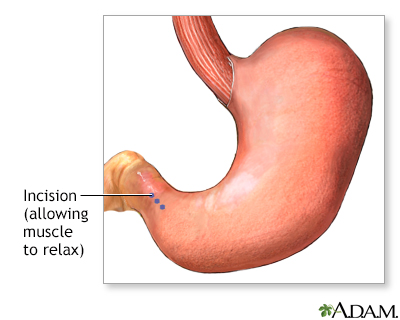 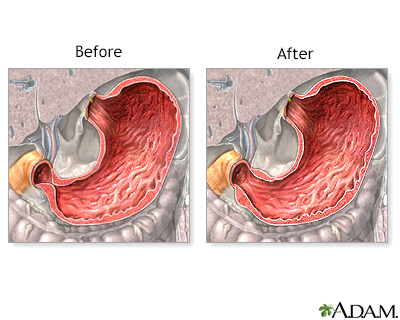