Change Selection
Back
To
Top
The information provided herein should not be used during any medical emergency or for the diagnosis or treatment of any medical condition. A licensed medical professional should be consulted for diagnosis and treatment of any and all medical conditions. Links to other sites are provided for information only -- they do not constitute endorsements of those other sites. © 1997- A.D.A.M., a business unit of Ebix, Inc. Any duplication or distribution of the information contained herein is strictly prohibited.
© 1997- All rights reserved.
LifeCycle Stories
Surprising Facts About Coffee
By Sherry Baker is a writer from Atlanta, Georgia.

How coffee gets from the plant to your cup

Sure, you're aware it comes from coffee beans. However, unless you've traveled in a coffee-growing country (typically in a subtropical or equatorial region), you might not recognize the plants that produce them. Coffee trees can grow up to 30 feet high, although they are usually pruned much shorter and can look more like shrubs in cultivation. Given enough rich soil and mild temperatures, they can live and produce fruit for two or three decades.

According to the National Coffee Association of the USA, it takes about a year for the cherries that grow along a coffee tree's branches to mature. First fragrant white blossoms bloom, then the ripe green coffee berries appear that contain beans. 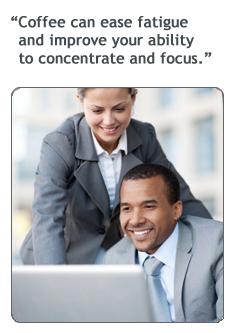 The berries are harvested by a machine or picked by hand and then either dry processed (the oldest method of processing coffee beans which involves placing them in the sun for a couple of weeks) or, more likely, wet processed -- a modern procedure that rinses off the outer pulp and protects the beans from damage. Next comes roasting of these "green" coffee beans.

When you go for a "dark roast" coffee, you will get a cup of java with a more intense flavor from beans that were roasted longer. Surprisingly, that doesn't mean you get more caffeine. It turns out that the longer beans are roasted, the less caffeine remains. So a "light roast" actually has less caffeine.

In recent years, you may have noticed an identifying label on packages of coffee in addition to information about the type of roast and flavor -- the designation "Fair Trade certified". Started by a global campaign launched 25 years ago, fair trade coffee is part of a larger movement of Fair Trade products, certified by the TransFair USA organization, which promotes the purchasing of products from independent growers, primarily small family farms, to help lift them from poverty. Retail giant Starbucks is the globe's largest purchaser of Fair Trade certified coffee.

Besides enjoying the taste of your favorite blend and roast, let's face it -- most of us like the kick we get from caffeine. According to the Mayo Clinic web site, caffeine has several health benefits. Because it stimulates the central nervous system, it can ease fatigue and improve your ability to concentrate and focus. Caffeine also works to relieve headaches in many people.

On the other hand, if you are extra sensitive to the natural stimulant, of if you drink over four cups of coffee a day, you can experience feeling jittery and nervous from caffeine; it often contributes to insomnia, too. Although you can opt for decaf coffee, be aware it is not totally caffeine-free.

The amount of caffeine in coffee varies widely. Here are the average amounts in coffee prepared by different methods: 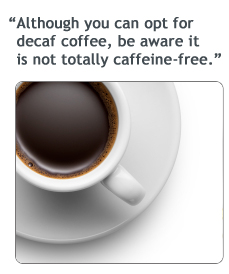 In addition to caffeine, coffee contains numerous phytonutrients that may play a role in lowering the risk of some diseases. For example, a study published in the New England Journal of Medicine found drinking coffee regularly may reduce the risk of Type 2 diabetes. Other studies have linked coffee drinking to the prevention of gallstones and dental cavities. Recently, the results of a large study conducted by Harvard School of Public Health (HSPH) scientists, published in Journal of the National Cancer Institute concluded that men who regularly drank coffee had a lower risk of developing any type of prostate cancer.

A cup of coffee by itself can help boost metabolism and has only two calories. However if you're watching your weight, don't pile on unwanted calories by adding too many extras to your java. Consider using low-fat or skim milk instead of cream and skipping the sugar or limiting it to half a spoonful per cup.

Tempted by "designer" coffees? Check out some calorie totals from these potentially diet-busting drinks: